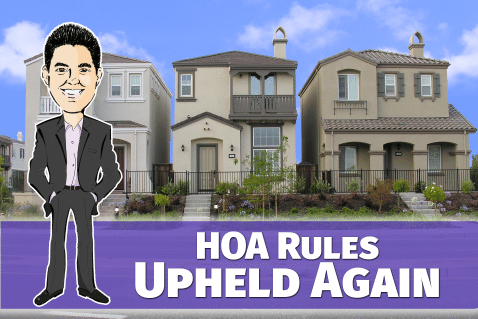 Oak Shores consists of 851 parcels of land. A majority of these parcels are developed with single-family homes. Only about 20 percent, 125 to 150, of the homes are occupied by full-time residents. Approximately 66 absentee homeowners rent their homes to short-term vacation renters.

A small group of property owners (“Owners”) brought an action challenging regulations and fees adopted by the Oak Shores Community Association (“the HOA”).

Owners are absentee owners who rent their homes to short-term vacation renters. Owners complaint challenged the following revisions to the CC&Rs: a rule stating the minimum rental period is seven days; an annual fee of $325 imposed on owners who rent their homes; a rule limiting the number of automobiles, boats and other watercraft that renters are allowed to bring into Oak Shores; a mandatory garbage collection fee; boat and watercraft fees; building permit fees; and property transfer fees.

The HOA cross-complained, seeking to enforce the CC&Rs and for unpaid assessments. As part of their defense, the HOA argued that the rules were supported by the circumstances.  For instance, the HOA presented expert witness testimony that explained the detriment to the HOA of having guests and the additional cost the HOA incurs because of guests.

The Trial Court found for the Association on the complaint and further found that the Association’s rules and regulations were reasonable and complied with the Association’s governing documents and the law.  The HOA was also awarded their attorney fees in excess of $1.1 million dollars.  Owners appealed.

The Appellate Court affirmed the Trial Court decision.  The Owners argued, in part, that the rule applying judicial deference to association decisions applies only to ordinary maintenance decisions.   The Appellate Court disagreed, observing that the rule of judicial deference was not limited to routine maintenance decisions.  The Court further observed that the CC&Rs gave the board of the HOA broad powers to adopt rules for the community, that the CC&Rs did not prohibit the adoption of rules relating to short-term rentals, and that the Board may reasonably decide that all owners should not be required to subsidize the homeowners’ vacation rental business.

This decision gives homeowner’s associations additional deference and continues the theme of allowing boards significant control over their own rules and regulations.  What seemed to be critical in this matter was the fact that the HOA had specific data to support the changed rules.  For example, the HOA was able to establish that short-term renters cost the HOA more than guests or permanent residents.

It cannot be lost in this decision that Owners challenged the attorney fee award in favor of the HOA and lost.  Thus, Owners are facing a judgment against them in excess of $1.1 million.  This is a shockingly large attorney fee award for what does not seem to be that complicated of a case.  However, fee awards like this are a risk that is always present in homeowner’s association disputes, as most every set of CC&Rs has an attorney fee provision, as does the Davis-Stirling Act (the law that governs homeowner’s associations).